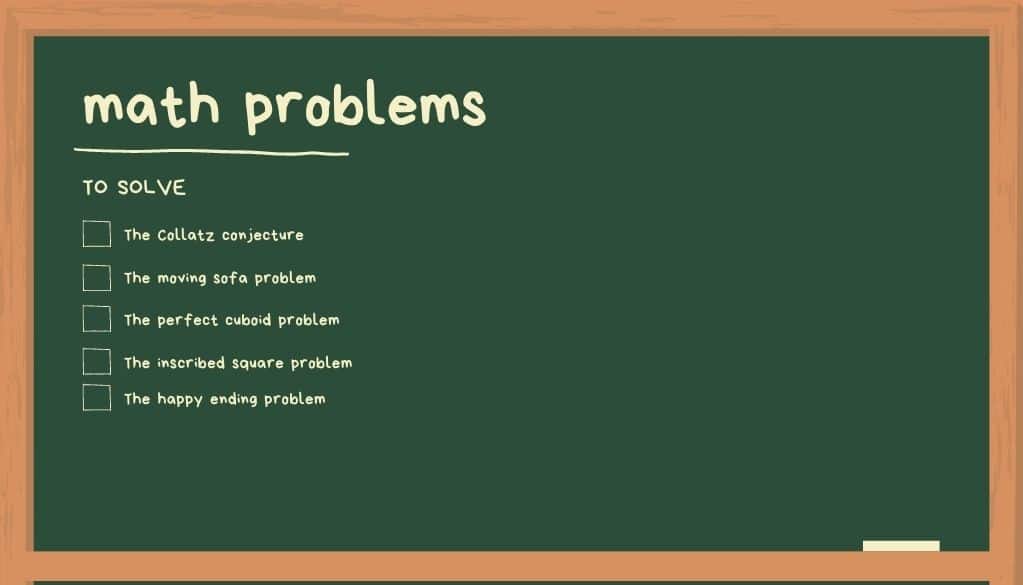 5 math problems no one has been able to solve

Engineers: Can You Solve These Math Problems? If so, then you are the first to achieve it …

Math can be very complicated, even for the best engineers. Enthusiasts sometimes say that all math problems have a solution, yet there are still great mysteries in math. An article on GineersNow shows us this by presenting us with five math problems that still haven’t been solved. Do you know them?

Choose any number. If you chose an even number, divide it by 2, otherwise, multiply it by 3 and add 1. Repeat the same process with each result, and you will end up with 1. At. EVERY TIME.

However, this conjecture has never been proven. Maybe too large a number would end up in infinity or get stuck in a cycle without ever reaching 1? But no one has yet managed to prove this.

Let’s say you move into a new apartment, and you need to fit your sofa in. However, the hallway you go through is ‘L’ shaped, and you have to put your sofa around the corner. Your sofa may get stuck.

Here is mainly the problem of the moving sofa: imagine a space in two dimensions; the corner is 90 °, and the width of the corridor is 1. Which two-dimensional space can go through the corner at best?

The largest space that can pass through the corner is called the sofa constant. Yes, yes, for real. No one is sure about its size or shape. According to the most advanced resolutions, this constant would be between 2.2195 and 2.8284.

You know the Pythagorean theorem: A ^ 2 + B ^ 2 = C ^ 2. These three letters correspond to the three sides of a right triangle.

If we translate this problem into three dimensions, there are four numbers. The first three are the dimensions of a box, and the fourth is the diagonal that goes from one of the top corners to the bottom corner of the opposite side.

First, draw a closed circuit. It doesn’t have to be a circle; as long as it is closed and does not intersect. You will be able to draw a square in this circuit so that each of its corners is in contact with it.

Well, according to the inscribed square hypothesis, any closed circuit should be able to inscribe such and such a square within it, which has still not been proven. This obviously puzzles a lot of mathematicians!

This problem is called so because it led to the marriage of two mathematicians who worked on it: George Szekeres and Esther Klein.

Here it is: Create five dots in random places on a piece of paper. Assuming that these points are not intentionally arranged – in line for example – you will still be able to connect four of them to create a convex quadrilateral – that is, a quadrilateral where the corners are less than 180 °.

Now, we want to apply this principle to the pentagon. You will need nine points. Then for a hexagon, you will need 17 points.

However, we still don’t know what is beyond that! How many points will it take to create a heptagon? An octagon? And the others after?

Why do you Need Doctor’s Note for Missing Work Days?

Reviews – How Much do Vets Make in USA?