Radical education or critical pedagogy is a complex and pluralistic tradition. It is easy to recall some names that are associated with Radical Education Theory such as Illich, Giroux, and Friere, but when it comes to defining it, things become a little more difficult.

What is Radical Education Theory?  Usually, it is defined as the form of education which makes one politically engaged, participatory, and leftist. Radical education claims to be for the powerless and poor and for difference and equality. The system is highly critical of traditional education practice and argues that traditional education fosters inequality and hierarchy. 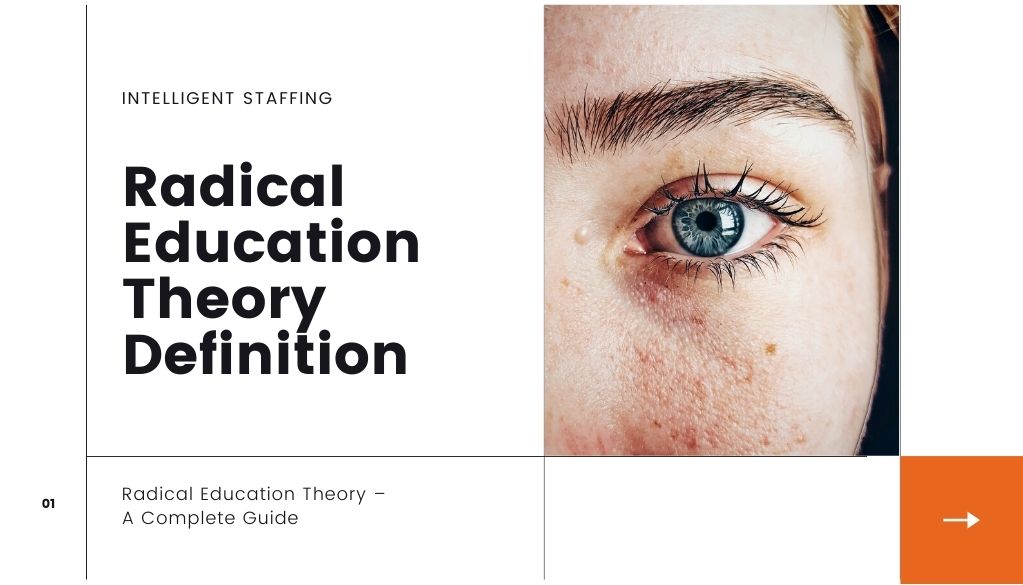 Most of the education theorists have pointed out the ambiguity found in the definition of Radical Education Theory. When Radical Education Theory is analyzed historically and theoretically, it is observed that the ideas of radical reconstruction of the teaching practices and education system have deep historical roots. Today, when we talk about it in modern terms, we try to understand the concept of ‘radical education’ in two ways.

Some theorists define it as an idea that protects the changing views about cognitive conditions, cognitive capacities, and factors forming human exposure that identifies the system of educational measures and solutions.

There is another group of researchers who explain Radical Education Theory as an unwavering commitment to achieve actual transformation. This transformation must be in sync with the views on the development of ideological, economic, and socio-political spheres.

The journal Radical Pedagogy’s content- analytical study of special publications shows that till date, this conceptualization of radical education theory is in the stage of intensive growth.

Nowadays, the scientific community is also taking considerable interest in the pedagogical problems that are connected to the cardinal improvement of the practice of education and change. In an attempt to define radical education theory, McGettigan has given us the following definition:

“Radical pedagogy is all about knowledge and education, and how they can (or should) change to best serve the purposes of both educators and the educated. Since the one constant in the universe is change and because education has come to be among the most important social institutions in the world, then it is very important to consider as broadly as possible the nature of education as it exists today – as well as how it might change as we move into the future”

To conclude, it’s safer to say that there is no unity in understanding the realm of radical education. Some theorists think that it is a deeply politicized aspect of educational institutions, practices, and politics. These people believe that education should and can bring a radical change to society. On the other hand, some think that radical education is a synonym to the innovative and advanced development in the field of education.

There are certain principles that govern the theory and practicality of radical education. These principles basically guide you through the understanding of Radical Education Theory. Let’s have a look at these guiding principles:

·         The teacher in their key role should induce in their students the culture of critical thinking. Beyond this critical knowledge, there will only be an incidental correspondence between what is learned and what is taught.

·         We should equip our children with a sense of judging wrong from the right rather than teaching them ‘the right thing’. Our children must be educated in such a way that they must be able to find out for themselves the right thing.

·         If we try to impose authority-based discipline on our children/students, they will feel disrespected and self-defeated. Young people are already inclined towards self-discipline; we just need to encourage them.

·         Teachers should not be ‘in’ authority but should be ‘an’ authority i.e. the pure source of knowledge.

·         Children are citizens and they have rights. They are to enjoy the same rights as any adult would in a democracy. They also have a right to judge the validity and relevance of knowledge to real life.

·         Teachers are not responsible and must have little or no concern about the outcomes of education. Rather, they should focus on increasing the quality of educational interactions.

·         Teachers are the intellectuals of society. Therefore, they are and should be treated as the curriculum experts. The study of curriculum and curriculum development in favor of learning, teaching, and behavioral sciences has been neglected for so long. This has left some of our students and teachers disoriented.

·         Though we inevitably share the knowledge but all knowledge in its essence is personal. Moreover, everyone can have their own truths and the closest we can come to the truth is inter-subjective agreement and justification.

·         The only significant standards in education are observational and experiential. These standards are essential to democracy.

·         Assessment by scale and quality is a poor and inadequate substitute for judgment.

Radical Pedagogy – What You Should Know 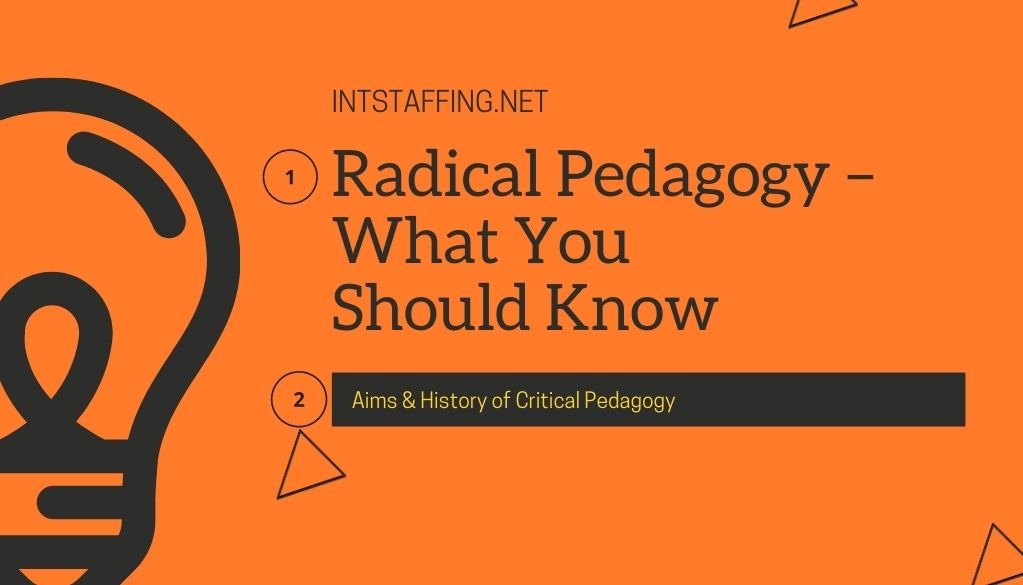 The term ‘Radical Pedagogy’ has many different implications. Different theorists have come up with their own definitions and explanations for radical pedagogy. Some say it is an analysis of educational institutions in the context of politicization, practices, and policies. For others, radical pedagogy is a source of bringing innovative and cutting-edge developments to the field of education. This includes all the latest methods, practices, theories, and ideas that pledge to rejuvenate the processes of learning and teaching at a fundamental level.

These perspectives may appear to be different but they are linked quite closely in their origins. Radical Pedagogy, in its entirety, is all about education and knowledge and how it should, it would, and it can change the traditional education landscape in favor of both educators and students. It best serves the purposes for both.

One very common claim in the United States at the moment is that education fails because public institutions are run by an inflexible bureaucracy. Since education is also a public institution, supporters of this point of view religiously believe that privatization of educational institutions will be a way to bring a boost in education: according to this logic, when education becomes subject to market forces, like any other industry, it starts to produce a better product.

In radical pedagogy, all these questions and arguments will be analyzed in terms of their validity. Radical Pedagogy would analyze which of these arguments fit best with improving standards and quality of education, if at all.

Radical Pedagogy deals with the fundamentals of education and knowledge. It is open to any advancement which may benefit both teachers and students.

Prior to the establishment of critical theory as one of the main theoretical processes, critical thinking was considered as a way of viewing reality for various generations. The meaning and the acts of logical thoughts have been themes for debate among Greek philosophers, Renaissance philosophers, academics, and thinkers of 19th and 20th centuries.

A source of critical pedagogy, critical theory has its origins in Hegel’s work, the critical philosophy of Kant. This was discussed in his book Critique of Absolute Explanation in 1881, the Communist Manifesto of 1848 by Karl Marx and Fredrik Engels and Capital Volume 1 of 1867.

·         Criticality and an appreciation of both text and meaning are encouraged. However, it’s about developing your understanding of what you are learning and how it blends into the environment to participate in radical education.

·         It offers participants the opportunity to engage in and co-produce education gives us the possibility of witnessing the strength and compromise that define democracy. As a site for democratic decision making, it includes the curriculum and the results of learning.

·         It empowers participants to build individual and collaborative solutions to their challenges by helping them. It makes people understand that they have agency and the ability to improve and control their lives, despite the disparities that exist in society. It helps them, in particular, to see that democratic collective action is the weakest and least effective tool.

·         To help teachers understand that, more than anything, the relationship between learning and teaching takes account of the partnership between educators and pupils/students. Many essential pedagogics in their discourse of this relationship mention that it should be focused on compassion, shared understanding, and similar interests.

Radical Education Theory and Critical Pedagogy have laid the foundation of compassion, understanding, and sincere sharing of knowledge in the field of education. It has opened the doors of dialogue between students and teachers. To understand modern education and to bring cutting edge changes in our prevailing education system, we must consider putting it under the shadows of Radical Education Theory and then having an open dialogue about it.